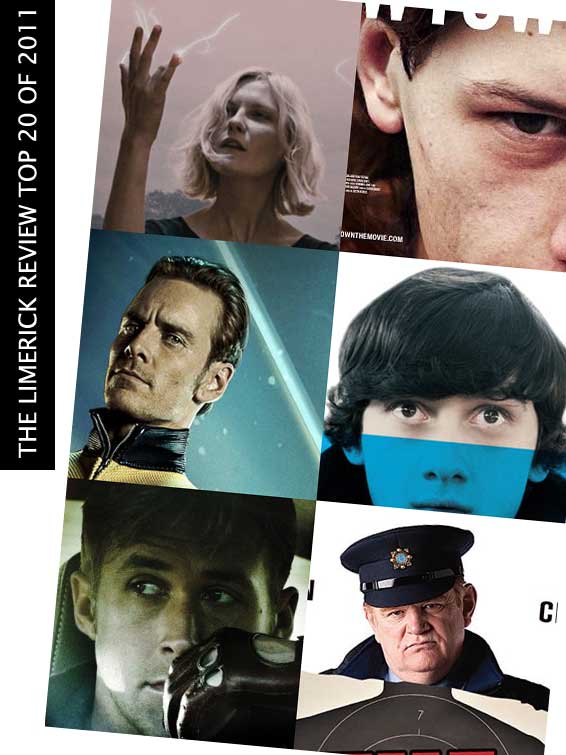 (We Need To Talk About Kevin, Beginners, Moneyball and The Adventures of Tin Tin to name a few)

and a couple were made last year but only received an Australian release this year.

Anyway, here they are – the best twenty films from 2011 reviewed in limerick.

What’s expected from J.J and Steve,

A sci-fi you can almost believe,

‘80s homage is more than achieved.

With a temper that he can’t control,

This monster must help a poor soul,

Who’s in her own danger,

This one will leave you in a hole.

Enjoy this last hunt for the Hollow,

And for Harry and gang,

It all ends with a bang,

With millions of fans left to wallow.

Modern Woody can be quite hit-and-miss,

And Wilson’s funnier when taking the piss,

But they’re both on the mark,

In Paris after dark,

Literature lovers will all adore this.

Honour’s not something that’s bought,

But from family and peers it is taught,

Now these men of the sword,

Must kill a war lord,

As for blood and laughs, it’s not short.

Even if you’re not into bike racing,

With each twist and turn,

Your stomach will churn,

But what fate are all these riders facing?

A good balance between drama and funny,

As Giamatti struggles with money,

But Shaffer’s not surpassed,

Amidst the much older cast,

And Amy Ryan makes it all nice and sunny.

After running away from a cult,

Not shy in her skin,

With suspense that will give you a jolt.

But never this crazed or aggressive,

A house guest from hell,

Breaks this home from its shell,

Refreshing but still quite depressive.

And after jail he has nowhere to go,

So his sister’s take turns,

And each of them learns,

How to cope with their idiot bro.

Sci-fi with a completely new spin,

As it’s more about dealing with sin,

In a concept that did my head in.

When Carrell is dumped by his wife,

He tries to accept single life,

Gosling helps him slick up,

So that he can pick-up,

Which eventually gets them both in strife.

These brothers don’t want to unite,

Instead, they just want to fight,

Action scenes are bound to excite.

With a narrative tying each scene,

It’s what Tree of Life should have been,

Each role is well played,

Should be watched on a cinema screen.

Before they came to resent one another,

And to stop Bacon and Jones,

They recruit freaks with hormones,

A good way for the franchise to recover.

Snowtown’s not for the faint-hearted,

“Bodies In Barrels” and how it all started,

But where credit’s due,

Is the director’s debut,

Going places that should be uncharted.

Unlike anything else done before it,

Submarine should be ticked as “I saw it”,

Unique and quite funny,

Weird to the point you’ll adore it.

This isn’t a Paul Walker flick,

But a classic that’s stylish and slick,

This ain’t no light-hearted romancer,

But Levitt’s emotional journey with cancer,

Best film? This could be the answer.

This buddy-cop film is one of a kind,

Cheadle straight-face, Gleeson out of his mind,

But it’s not only thugs,

Into guns, pros and drugs,

As dialogue goes, this won’t be outshined.

Sci-fi through the eyes of von Trier, Is a study of depression & fear, With no Aersosmith in sight, Or...